I flew to New York the night before the auction, as I knew I wanted to get there early. I even used my Holiday Inn hotel points to stay at the Crowne Plaza UN for 3 nights. At $ 300+ a night for a decent hotel, I would rather save that $ 1,000 on the auction!

I got to Rockefeller Center at 8:00 as doors were to open at then, but it was 8:45 before they let anyone in. While waiting in line, I met some great people and we all started chatting about the auction. Typical Star Trek fans, friendly and happy to share their stories. One guy was from Iowa and flew in just for the day. Another, Dana Hammontree, was from Texas and has since become a good friend and a mentor of sorts since he is a long time collector and well known within collecting circles

We finally got in and went upstairs and found some good seats. Of course, The History Channel was there with a bunch of cameras as they were doing a special on Star Trek and the auction. And there were some choice items on display in the room. 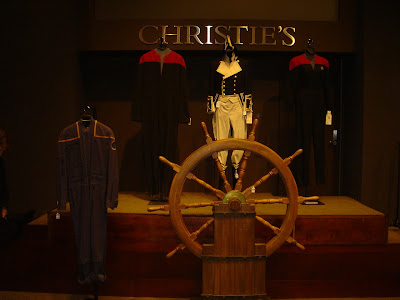 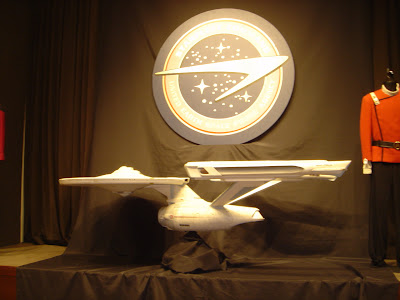 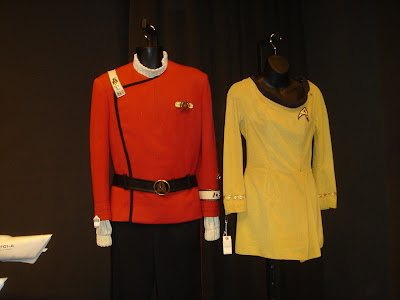 When the auction started the first few lots were mostly paperwork from various movies: Concept art, blueprints and drawings. Then there was furniture from the Romulan Senate in “Star Trek: Nemesis”, and a set of six saddle shaped stools (lot # 12) went for $ 4,800 to a mother, who had her son with her! She certainly didn’t look like a Trekkie!

The big item of the first hour was the Enterprise E Captain’s Chair, which fetched just over $ 50,000.

Props started going for ridiculous prices, as two empty bottles of Chateau Picard wine sold for $ 5,500, Captain Picard’s tool kit went for $ 7,500 and Worf’s missile launcher from “Insurrection” went for $ 16,000!!! These prices were totally crazy based on what sales had been for props in the past.

The Enterprise “E” Primary Filming model went for $ 110,000 to end the Next generation feature film section

The auction then moved onto “Enterprise” items, and costumes went for very reasonable prices with Archer costumes going for $ 2-3,000 and T’Pol’s going a bit higher.

The gavel came down for the day and I went through day 1 without a purchase. I went back to my hotel room a bit dejected, but I was sticking to me plan and not overbidding and that made me feel good.

One thought on “The Christie’s Star Trek Auction – Day 1”