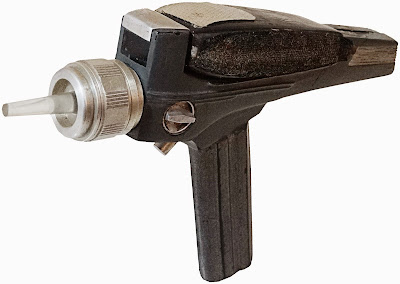 A guest blog by Gerald Gurian

This exceptionally rare Star Trek: The Original Series fiberglass mid-grade Phaser Pistol is one of only two such examples known to have survived from the ’60s; and it has been exhaustively researched and precisely screen matched to the mid-grade phaser prop featured in an opening scene in the 2nd season TOS episode “Assignment: Earth”, where it is seen in a close-up view on-screen in the hand of a security officer in the Transporter Room.  Most significantly, it is the presence of both a uniquely contoured scratch line and a small blemish formed by excess paint – both on the front face of the pistol body – as well as perfectly matching orientations of the attached silver nozzle ring and the right-angled metal plate on top that have enabled this particular prop to be positively identified on-screen in that memorable time-travel episode, which originally was broadcast on Mar. 29, 1968.

Furthermore, it is very likely that this historic hand prop, as part of the Desilu and then Paramount inventory, was utilized in the filming of several other TOS episodes during the 2nd and 3rd seasons of the series, in addition to “Assignment: Earth”.
In the following five composite images containing Original Series screen captures shown side-by-side with modern day photos of this fiberglass Phaser Pistol, please note the matching overall contours and matching designs of the major hand phaser and pistol body components that are seen from multiple camera angles — in addition to the numerous very subtle contour matches specifically mentioned in the annotations.     The following image demonstrates the precise screen match of this unique prop to the episode “Assignment: Earth”.

A key aspect in the authentication of this phaser was the identification of a tiny mold flaw / accent line defect in its rear body fin appearance which is a perfect match to a mold flaw observed on a different phaser seen in a close-up screen capture from the Original Series episode “Spock’s Brain”.   In the following image, note how the width of the highlighted white band on the phasers suddenly narrows at the end due to the little flaw / deviation of the grey ridge line that runs along its bottom border.  The different orientations of the grooved regions on the silver noozles attached to the front of the pistol bodies establishes that the two phasers seen below are in fact two different hand props and not the same piece. 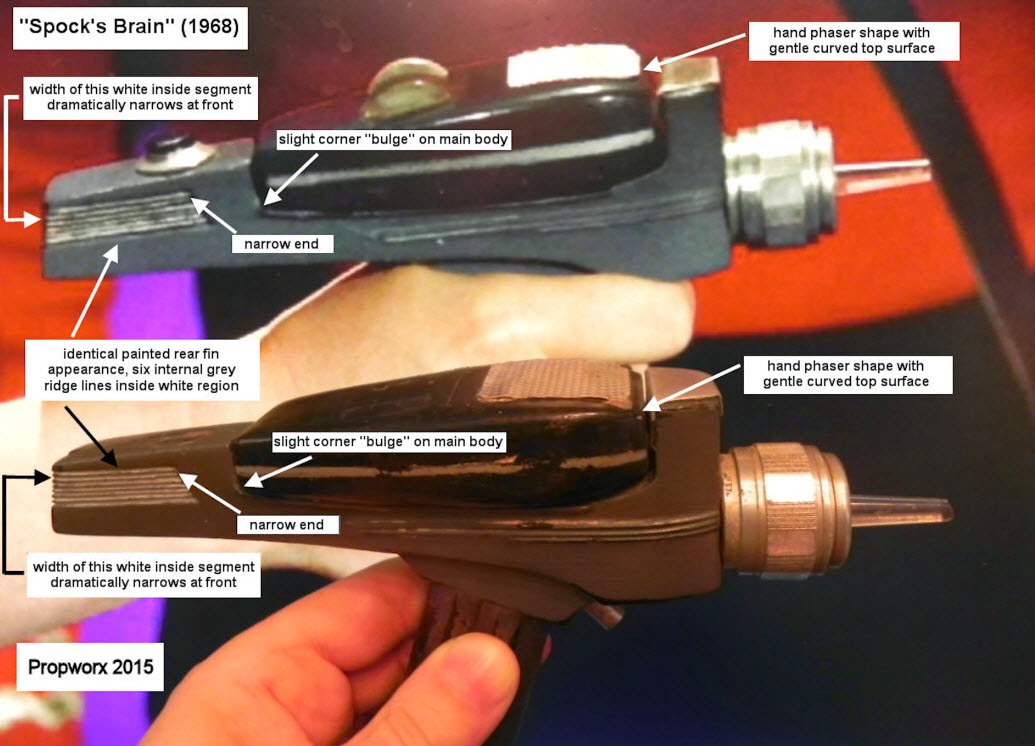 The presence of several very subtle contour line matches and tiny geometry matches between this unique phaser and the examples observed on-screen in different Original Series episodes, as illustrated in the photos below, are additional highly compelling factors in the authentication analyses.

As well, the uniquely patterned silver foil material on top of the permanently affixed hand phaser unit has been photo matched to the foil on the Greg Jein TOS Hero Type II Phaser, and this vintage material match is another key element of authentication.

Additionally, high resolution photography of the velcro on the hand phaser has revealed some gold, blue and red TOS velour Starfleet tunic fabric traces still trapped in the velcro – exciting remnants from production on the Desilu soundstage 47 years ago! 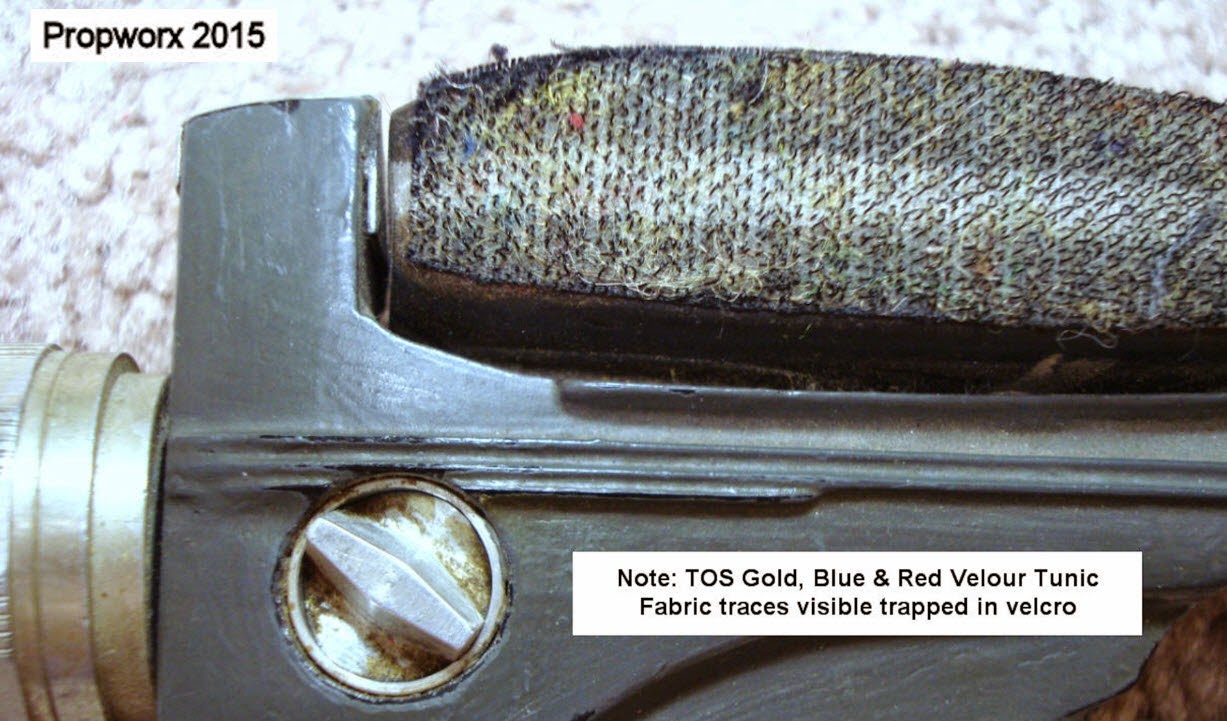 This extremely rare Original Series hand prop bears the to-be-anticipated paint wear, surface scratches and some cracks/seam separation in its fiberglass pistol body; and it is missing the semi-circular acrylic dial and metal faux thumbwheel control that were once attached to the top of its hand phaser — yet it remains an undeniably visually exciting, sturdily-constructed and highly presentable piece of Star Trek history. The only movable part on this weapon is the tiny circular silver control knob inset on the front left side of the pistol body which still smoothly rotates a full 360 degrees. 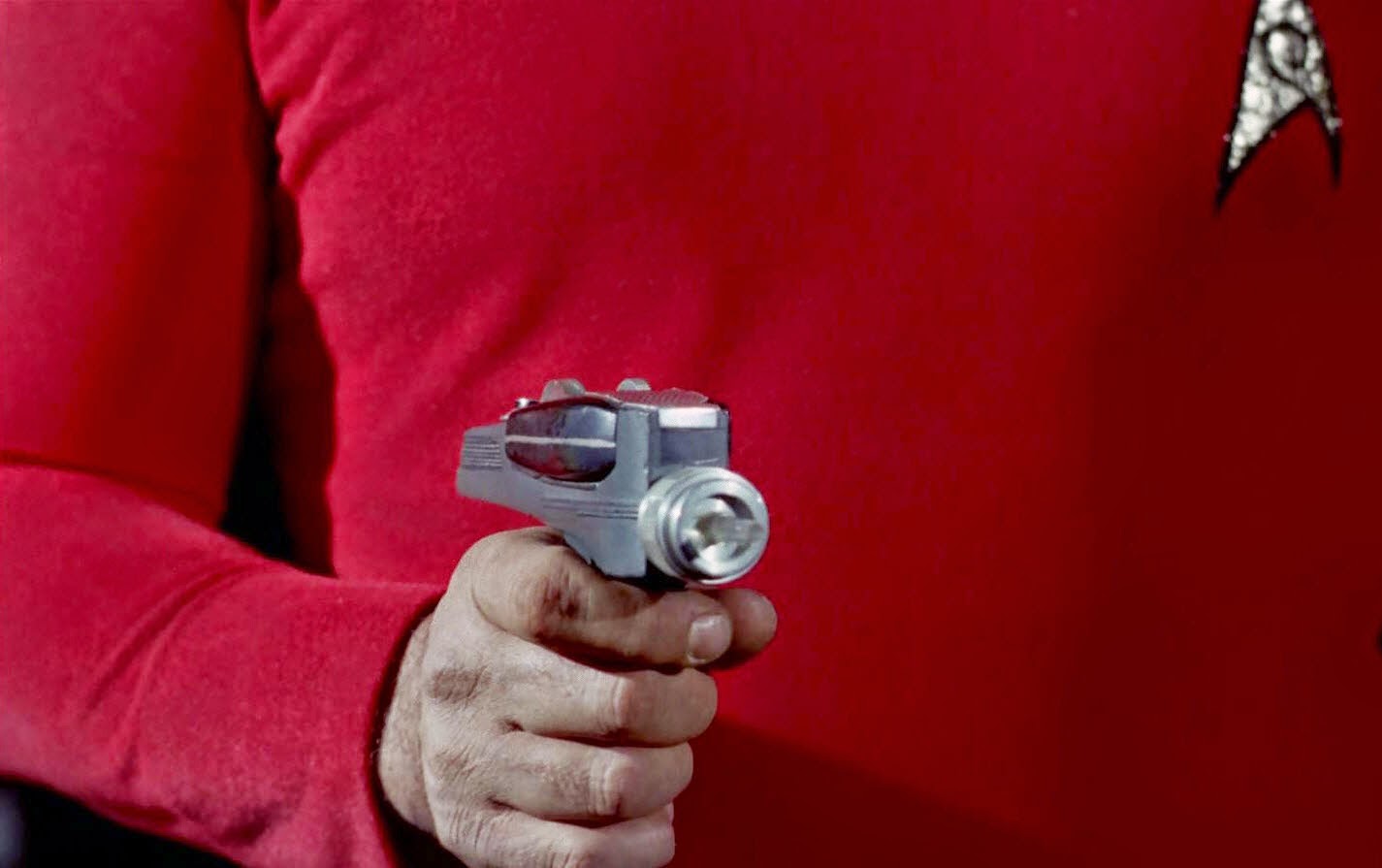 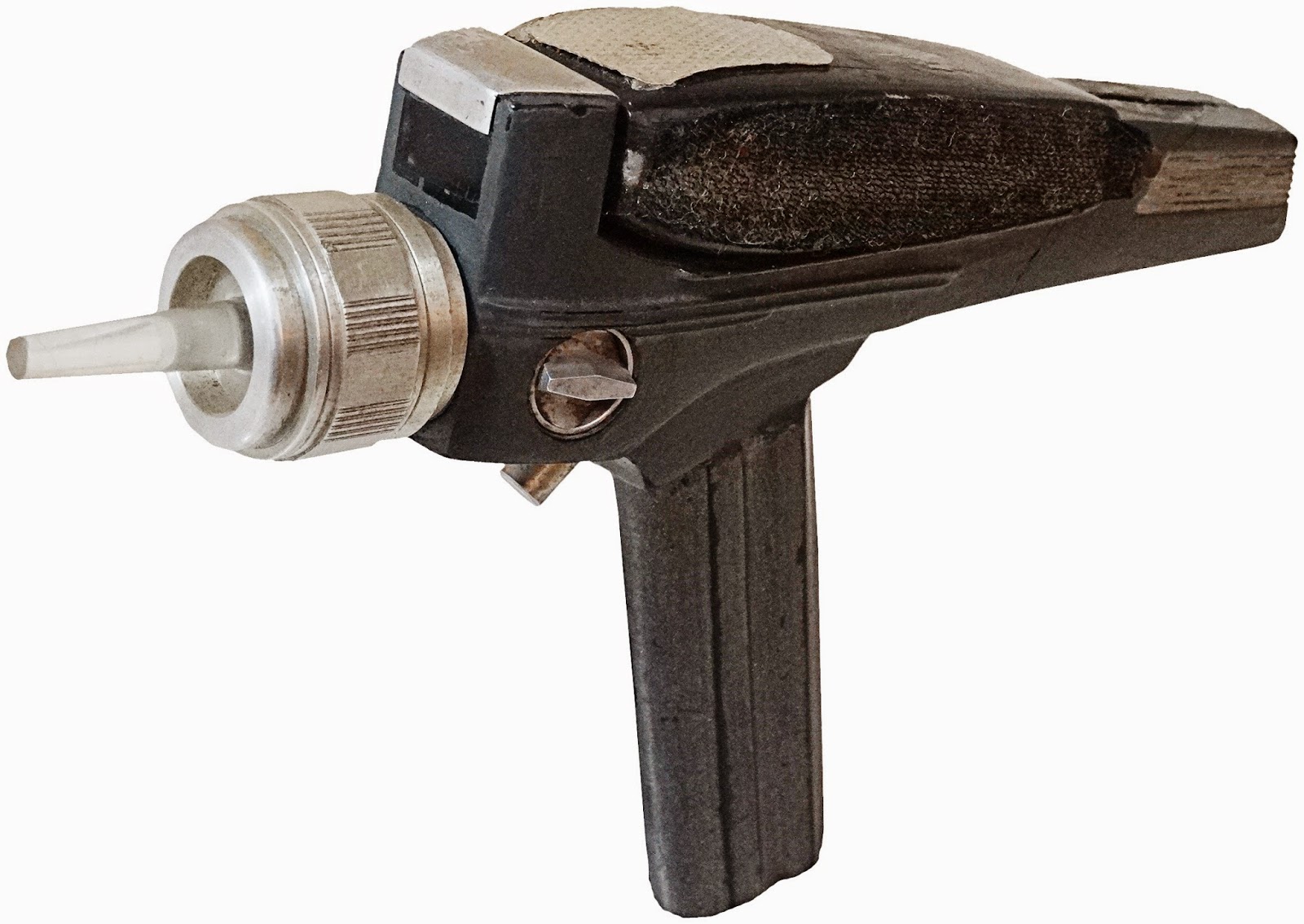 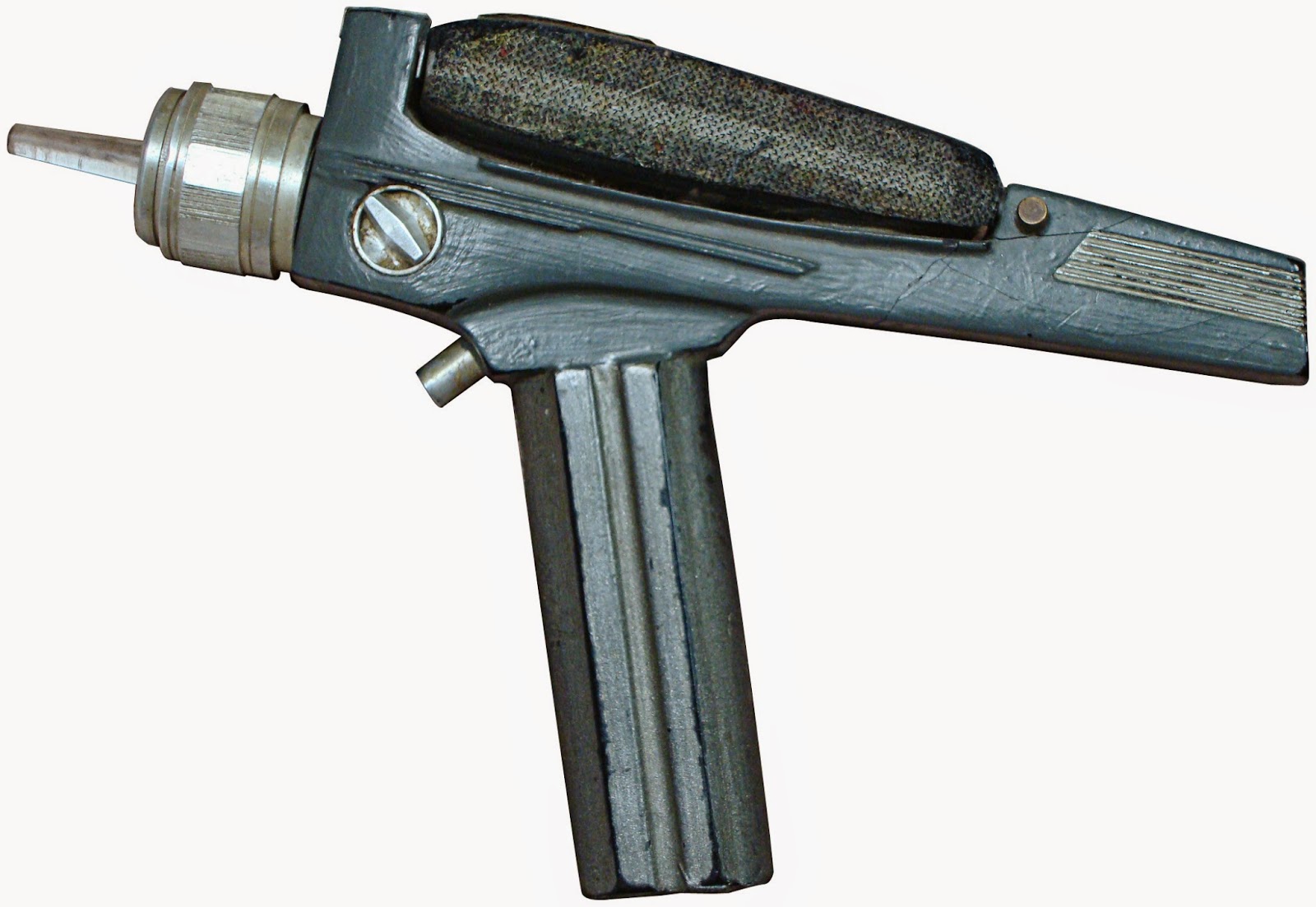 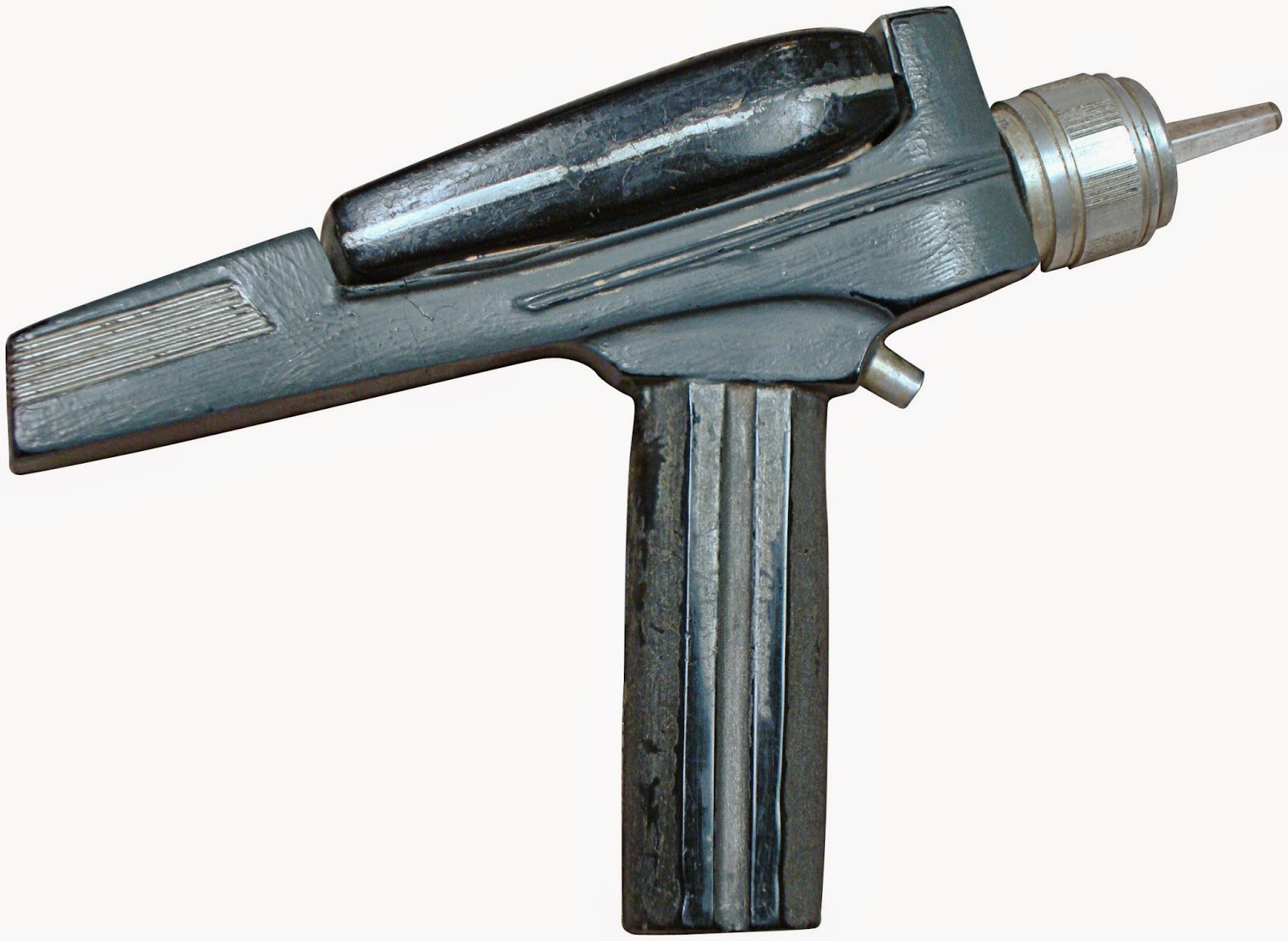 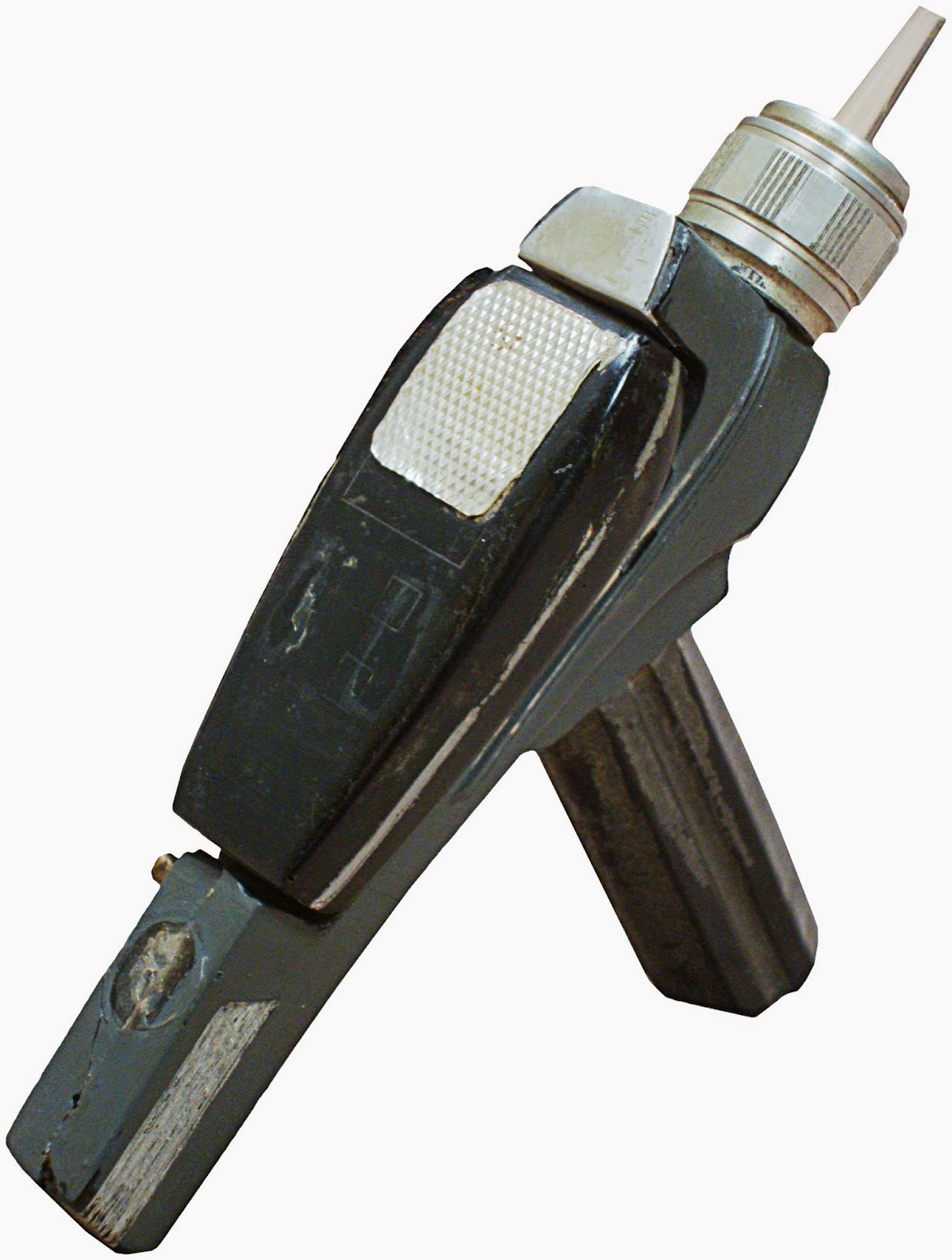 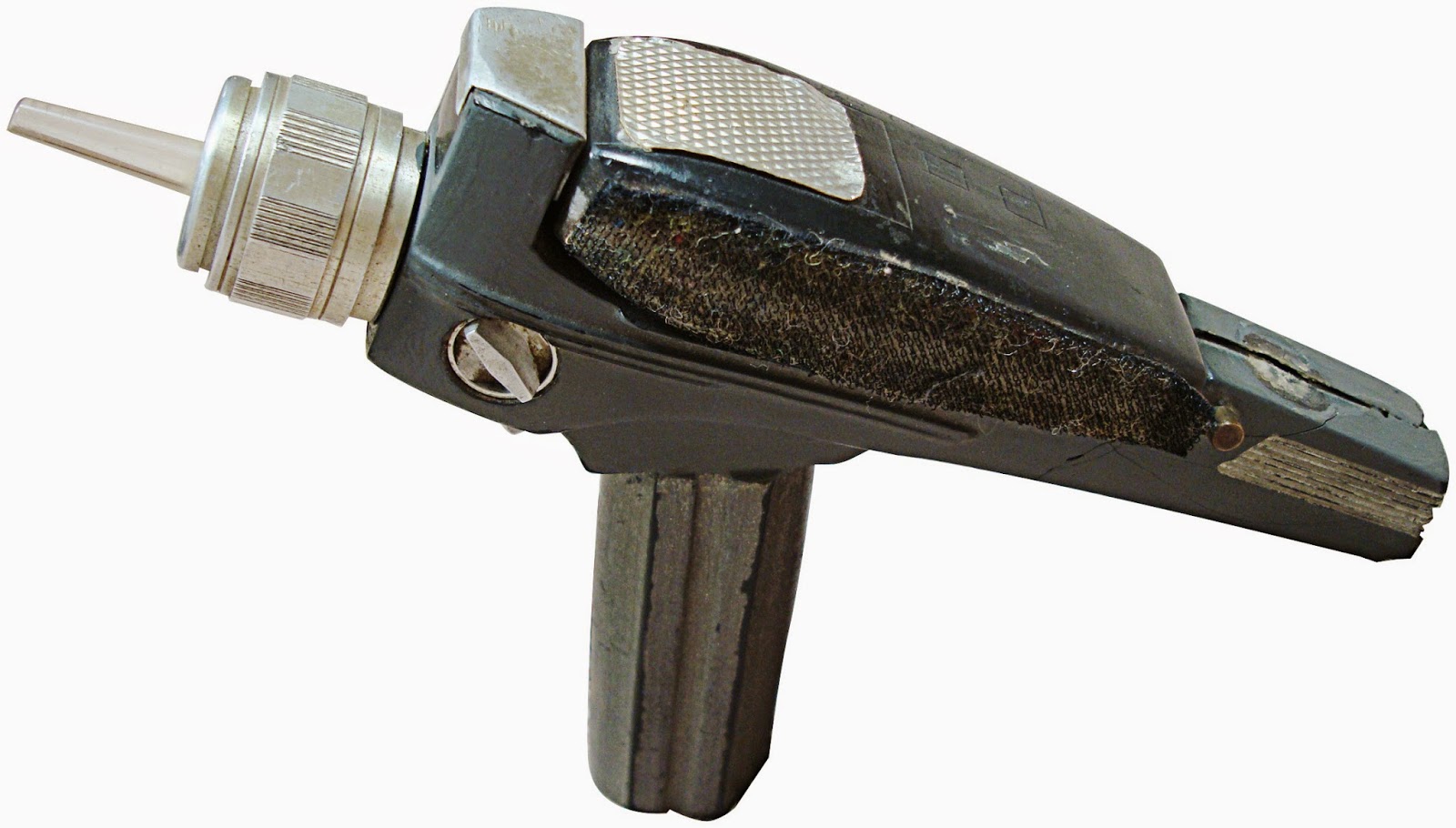 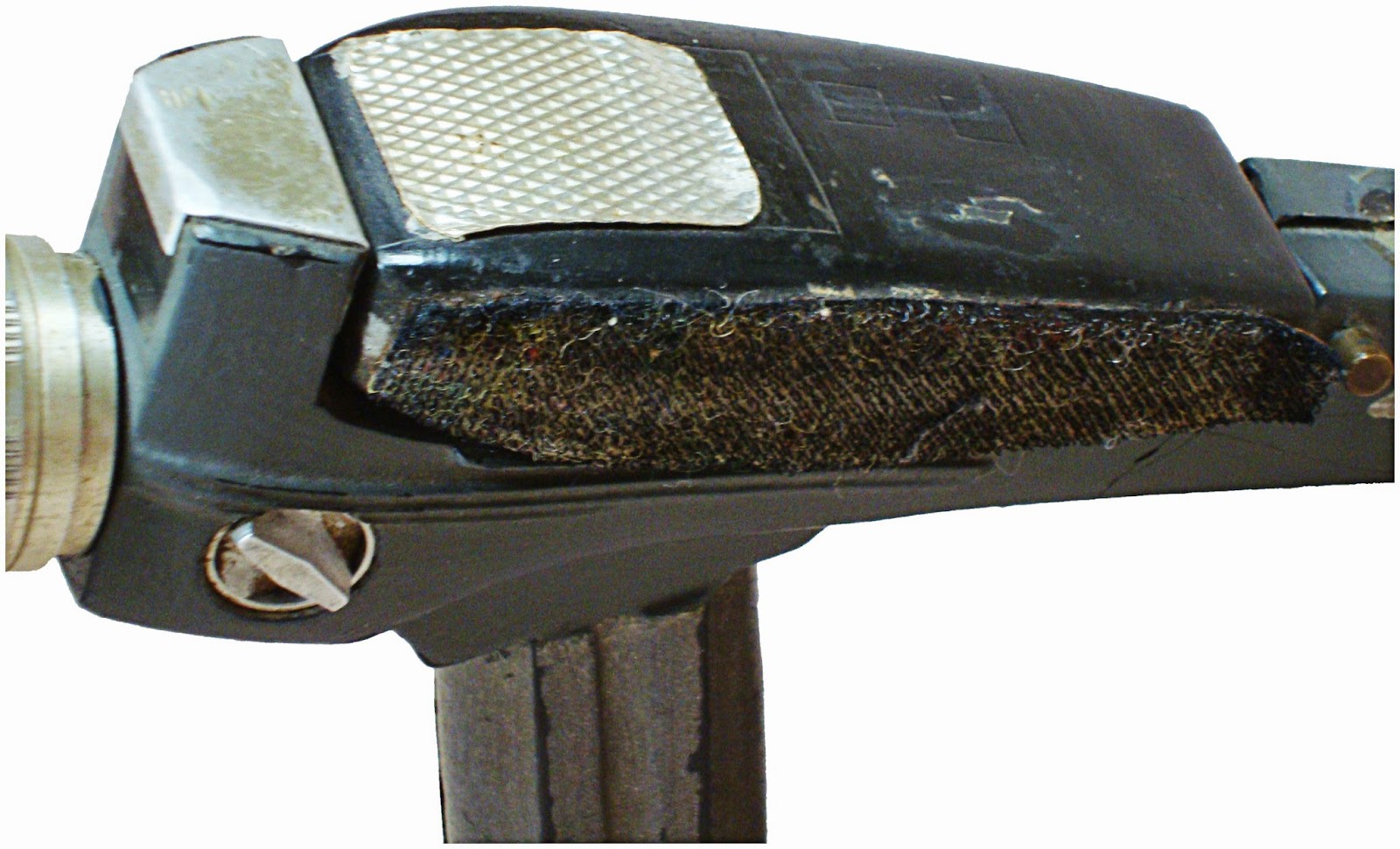 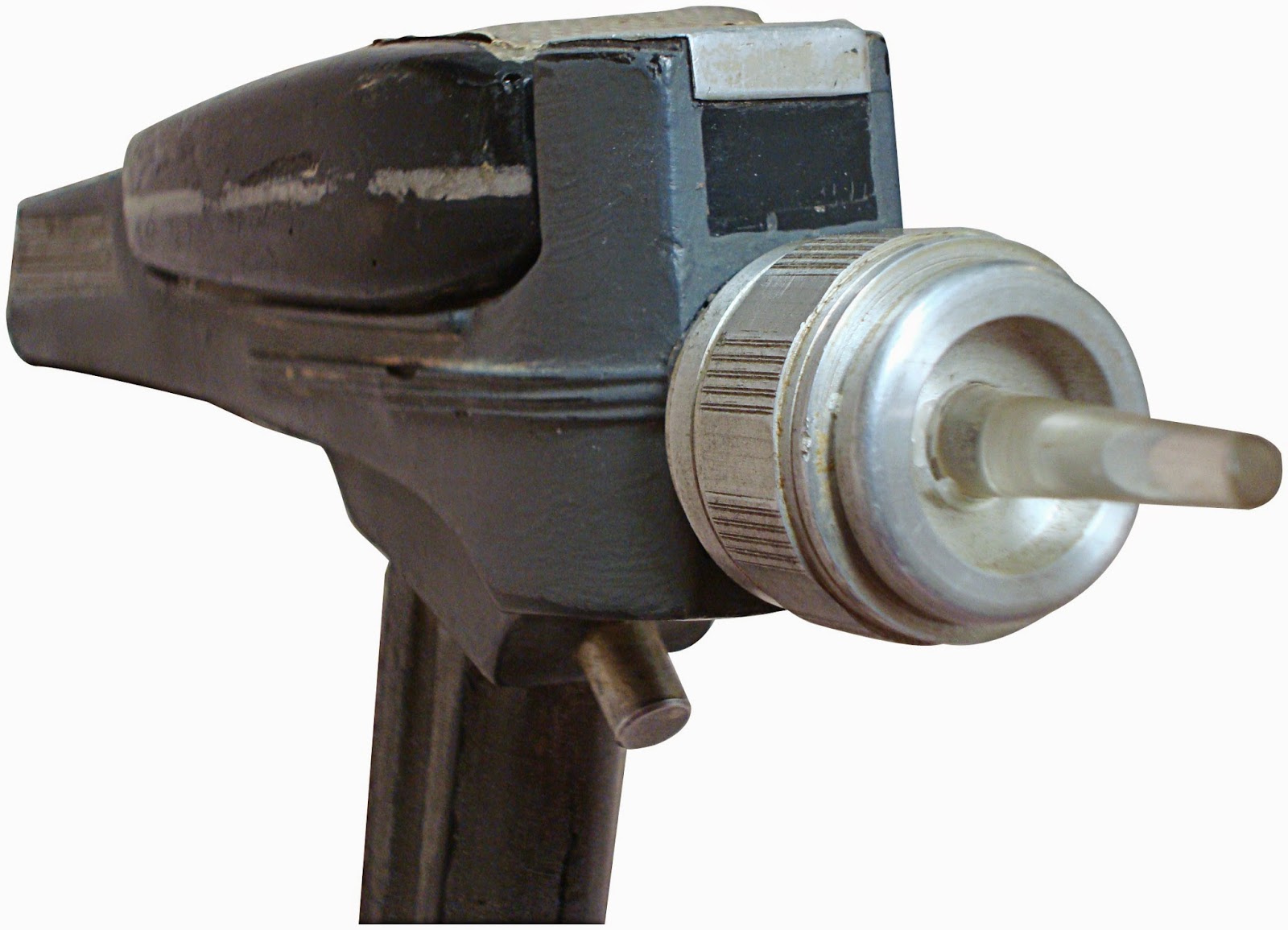 Thanks to Gerald Gurian, the owner, for writing this blog!